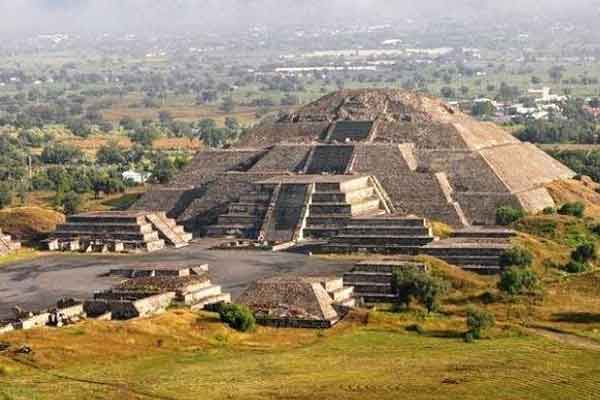 There is an ancient Mayan city found in the jungle of tropical forests in the Peten Region, Guatemala. It is no ordinary city but a megapolitan inhabited by millions of people, complete with industrial-scale agricultural land and an integrated canal system. The city’s existence was revealed thanks to the Light Detection and Ranging (LiDAR) mapping technique. The way it works is by reflecting a laser beam onto the ground and then revealing detailed contours behind the dense trees in the forest.

The mapping of an area of ​​2,100 square kilometers further reveals the fact that the Mayans — one of the original inhabitants of the American continent who lived around 1000 BC to 900 AD — were a nation that was skilled in farming. “This could be a strong reason why America is known as the origin of various important plants today, such as chilies and potatoes, for example,” said Thomas Garrison, Assistant Professor of Anthropology from Ithaca College in New York, the USA, as quoted by Time.

The mapping of the area was able to detect as many as 60,000 individual structures, including four locations of Mayan worship centers equipped with pyramids and open fields. Not only the discovery of an ancient city in the middle of the wilderness, but the Mayans also have many unsolved mysteries. Here are some of them

The popular view is that the Maya were a peaceful tribe: they enjoyed stargazing, trading jade, gold, and beautiful feathers in exchange for other goods.

However, that assumption was dashed when archaeologists uncovered ancient symbols and letters left on statues and temples.

As it turned out, the Mayans were no more violent than their northern neighbors, the Aztecs.

Scenes of war, massacre, and human sacrifice are immortalized in rock paintings.

Wars between city-states turned into endless brutal battles, so many believe it was the cause of the decline of the Maya civilization, which eventually perished.

The world was made a scene ahead of December 21, 2012 – which was considered the ‘doomsday according to the Mayans’.

The date is said to correspond to the Mayan Long Count calendar, a very complex system covering a period of about 5,200 years.

The hysteria ahead of December 21, 2012 — the endpoint of the Long Count’s count — even made the United States Space Agency (NASA) speak up, dismissing all rumors and false news circulating. All the arguments for the ’cause’ of the apocalypse were disproved by science.

The United States Space Agency, NASA, revealed that the Mayan apocalypse rumors began with a claim about a “wild” planet called Nibiru. “It is said that the planet discovered by the Sumerians was pointing towards Earth,” explained NASA on the nasa.gov site.

Incidentally, December 21, 2012, coincided with the end of the 13th b’ak’tun long count calendar (Long Count) Maya. “That’s why suddenly the apocalypse is predicted to occur on December 21, 2012.”

The Mayans turned out to have language, letters, and even books. To the untrained eye, their alphabet looks like a strange series of dots and scribbles.

In fact, the ancient Mayans used a complex language. Not all members can read.

The books were allegedly produced and used by religious leaders or priests.

The Maya had thousands of books when the Spaniards arrived and colonized their land. However, immigrants burned most of the books.

Only four Maya books or codexes have survived.

The ritual of human sacrifice is considered closely related to the Aztec culture of Central Mexico. However, that assumption may have been because the Spanish chronicler was there to witness it.

It turned out that the Mayans were just as thirsty for blood when they made offerings to the gods they worshiped.

The Mayan city-states often fought with each other, and many enemy fighters were taken, prisoner. These captives were usually enslaved or sacrificed.

High-ranking captives such as nobles or kings were forced to play ball matches against charming parties.

After the match, the outcome of which was predetermined — according to who won and lost in battle — the captives were sacrificed in a ritual.

The Actun Tunichil Muknal Cave in Belize bears witness to the Mayan ritual of human sacrifice.

At the end of the cavernous twists and turns, on a stretch of wet ground dubbed “The Cathedral,” are 14 human skeletons, victims of the Mayan ritual sacrifice to their god.
The most famous is the skeleton of an 18-year-old girl nicknamed “The Crystal Maiden.” He was laid in a cave room, which was separated from the other bodies.

It is believed that the poor girl died horribly, allegedly with a bat, where two of the victim’s spine was broken by it.

Her body sticks out of the ground in a unique position and is hardened by chalk, forming a shining layer of calcite — inspiring her nickname as the ‘crystal maiden.’

Meanwhile, the age of other skeletons varies, from 1 year to an estimated 45 years. The majority died from fatal head trauma. Some even had their skulls crushed.

The ancient Maya was one of the most mysterious civilizations in the world. They believe the underground world that exists in the caves is home to the gods who control rain and harvest.

Young children and women are believed to be the purest human beings and most desired by the gods. That’s why they are used as sacrifices to get collective luck.

Around the year 700 AD, the Mayan civilization became strong. Powerful city-states ruled over weak followers, trade flourished, and cultural achievements such as art, architecture, and astronomy were at their peak.

By 900 AD, a number of city-states that were important supporters of Mayan culture, such as Tikal, Palenque, and Calakmul, declined and were abandoned.

The Maya civilization declined until it finally perished. What happened? No one knows for sure.

Some experts say war is the trigger. Others argue that climate change, hunger, and disease outbreaks are the main factors.

It’s also possible that what happened was a combination of all of these. However, until now, experts have not found an agreement.

Even though the Ancient Mayan civilization ended a thousand years ago, that doesn’t mean the people died.

Maya culture was still around when the Spanish conquistadors arrived in the early 1500s. Like the rest of America, they were conquered and enslaved, their culture banned, their books destroyed.

For 500 years, the Mayans have struggled to maintain the culture and traditions of their ancestors. In Guatemala, parts of Mexico, Belize, there are ethnic groups that still adhere to their traditions, such as language, dress, and religion, dating back to the days when the great Mayan civilization was at its peak.