Recently, several media outlets have reported on information shared with them claiming an alleged intervention by the Tres Santos project… Read More

When the Spanish Conquistadors built homes in the New World, they brought with them an architectural style that fused indoor and outdoor living with large courtyards, breezy verandahs and wide doorways. 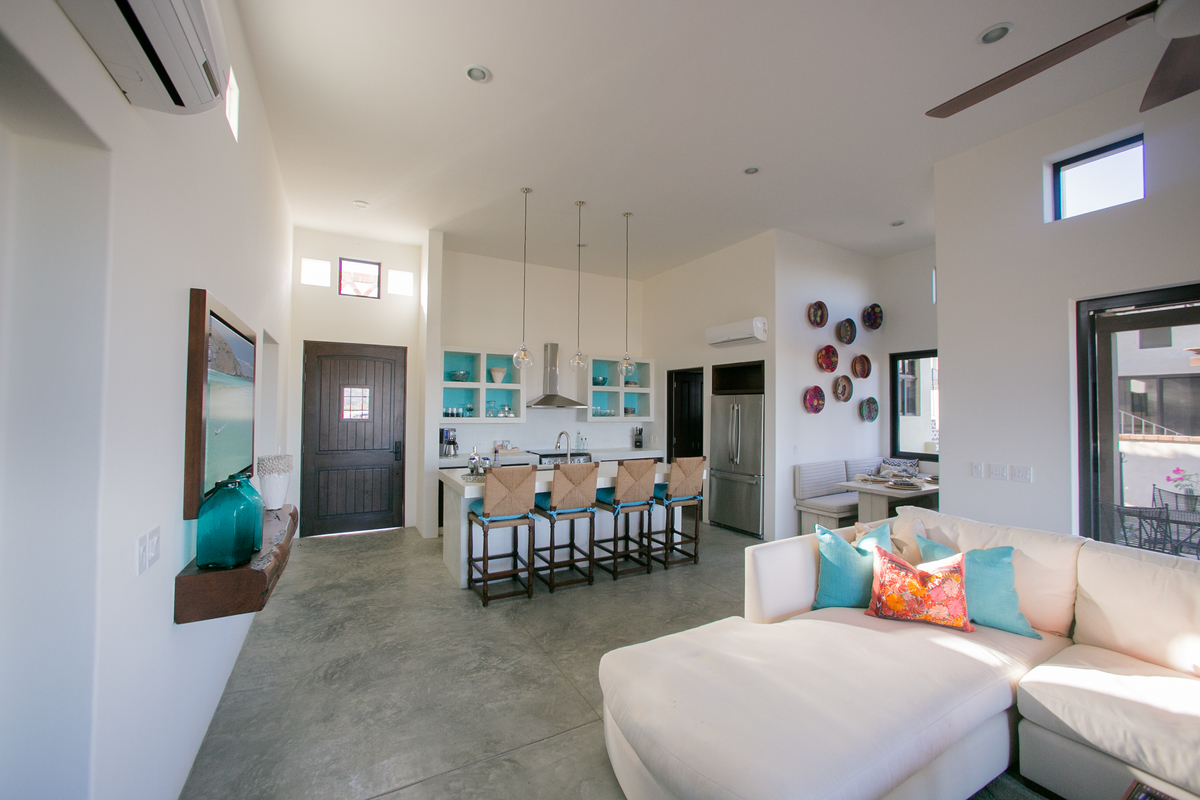 The second installment of our local drink series arrives by way of Miguel’s, a staple of the Todos Santos food… Read More

There’s plenty to admire about a groundbreaking businesswoman who runs a 20-acre farm, grows some of the region’s finest produce, and owns the distinguished title of Entrepreneur of the Year in Baja California Sur. 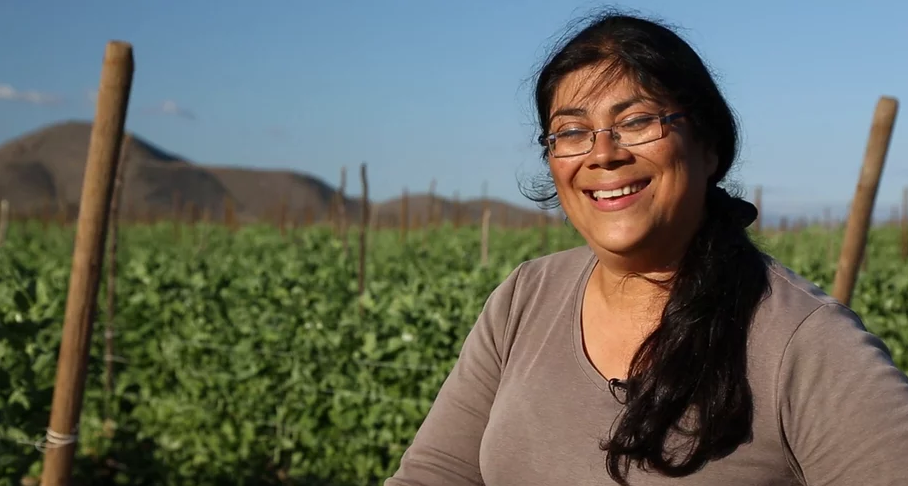 Todos Santos is teaming with authentic restaurants and bars serving up some unforgettable craft cocktails unique to the Baja. We… Read More

True yogis know that a strong yoga practice is less about mastering poses and more about finding and maintaining your intention, both on and off the mat. 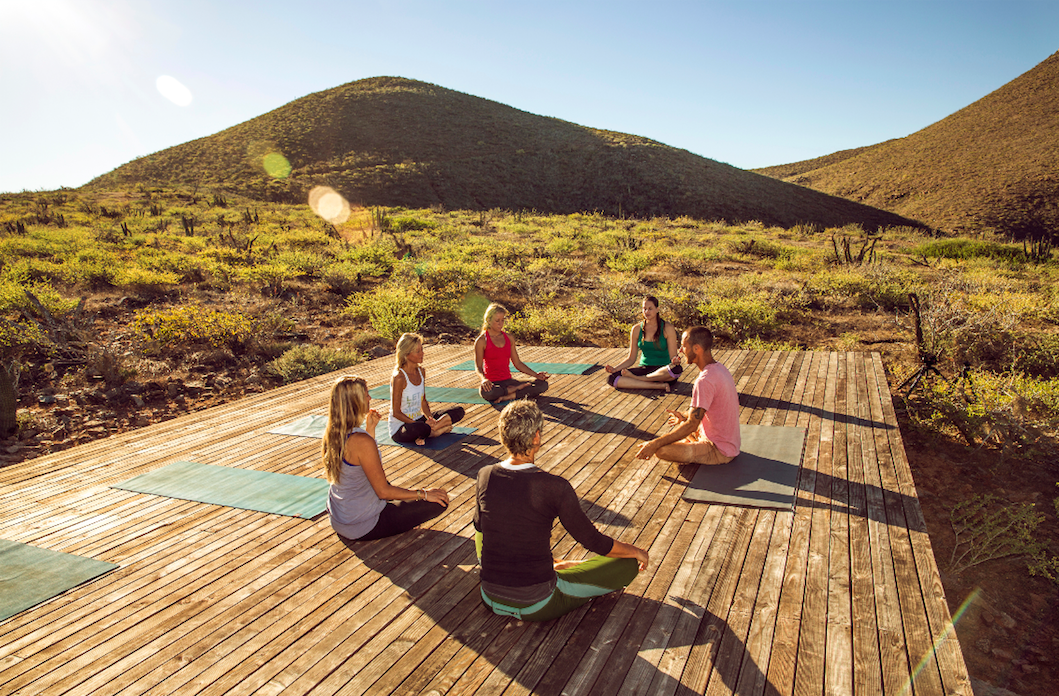 “It all started over dinner one night,” says McCandless Sutton, as so many gastro success stories do these days. 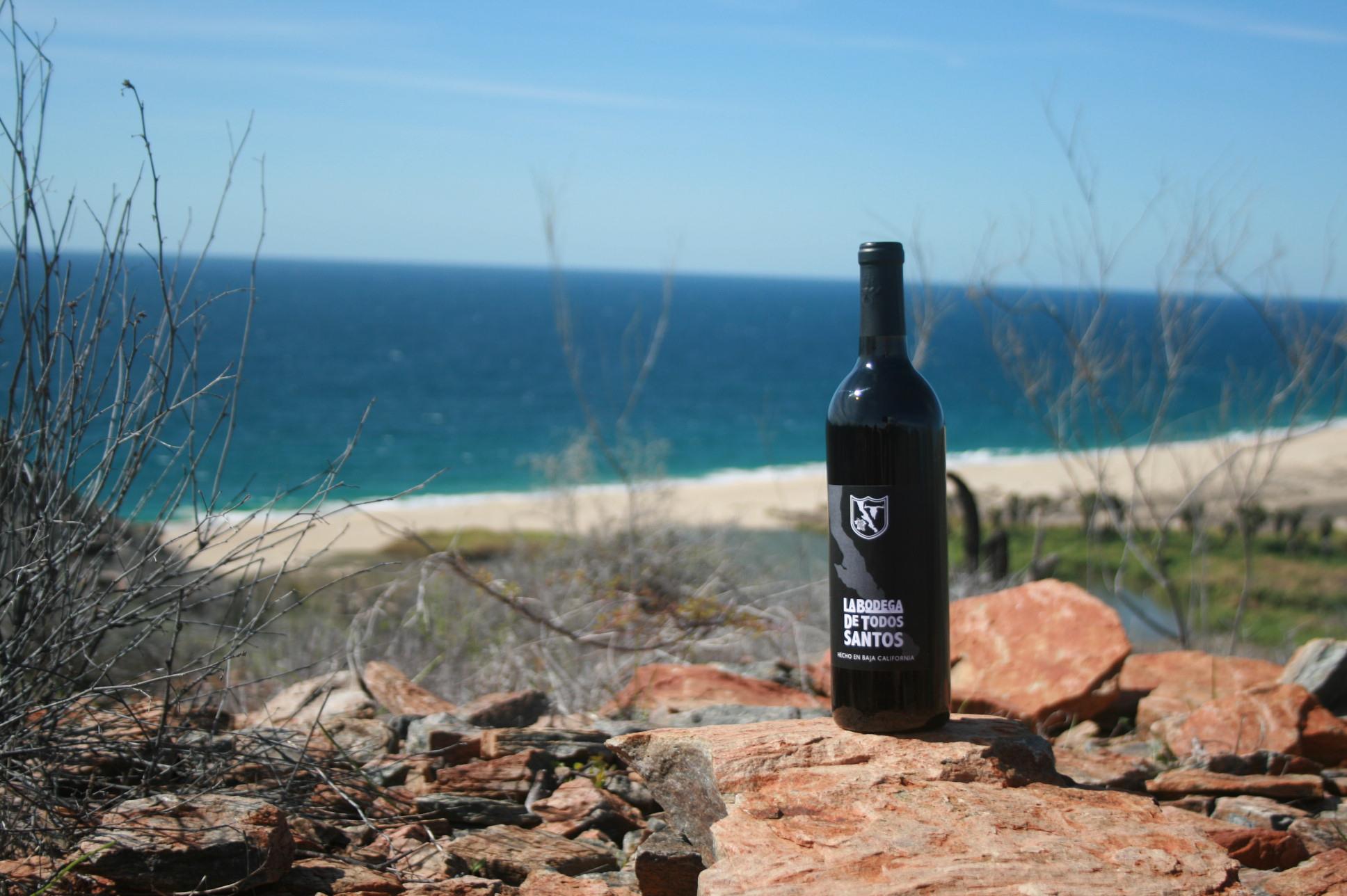 Yes, You Can Surf

Stirred by strong currents, many of the wild and windswept beaches in Baja Mexico are better for strolling than swimming. 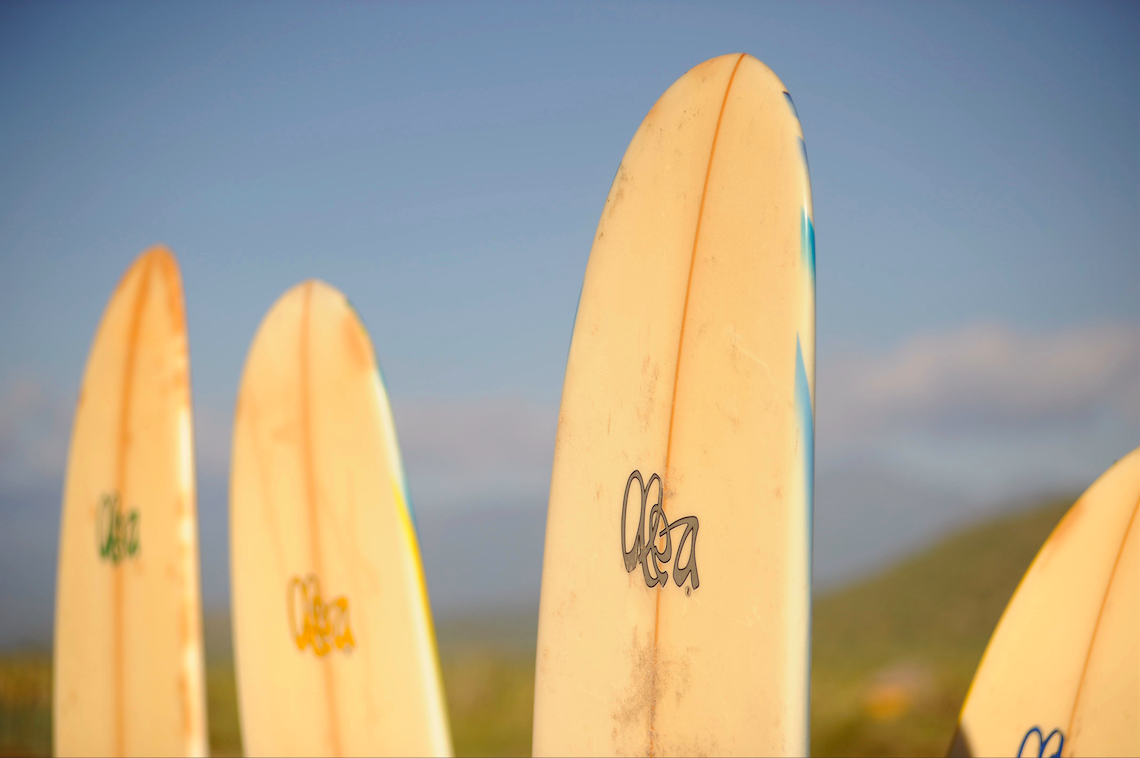 January saw continued progress on the Town Farm, including further produce from Elizabeth and the development of several new farm-side homes. Check out the changing scenery from this aerial time lapse. 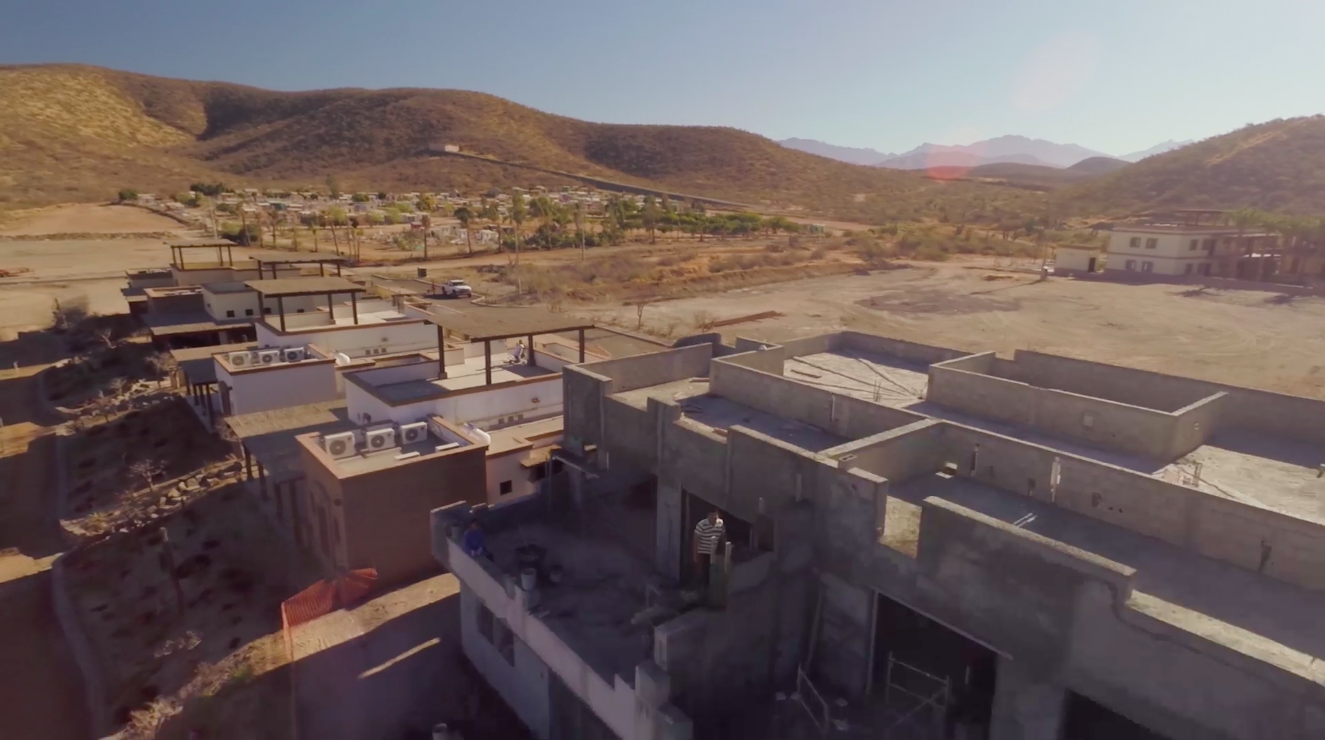 Intimate venues, awesome bands, and epic music—that’s the lasting impression after yet another blockbuster rendition of the Todos Santos Music Festival. 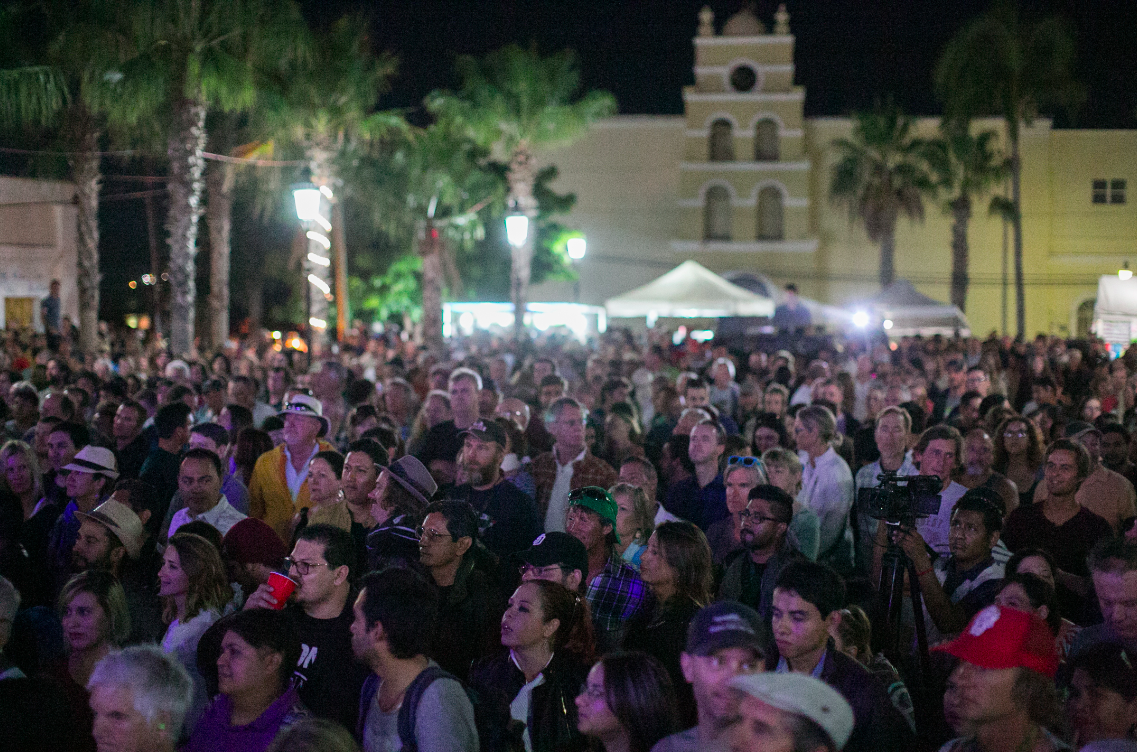 What is Mindful Living?

Place has always been an important ingredient in achieving mindfulness—the state of peaceful harmony that permits us to see our surroundings calmly, live in the moment, and let petty distractions fade out on their own. 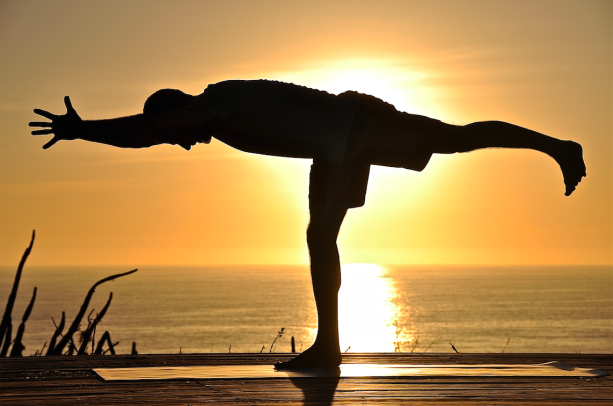 At first glance, the Todos Santos Music Festival might look like any other high-profile music showcase—the star-studded lineup, the international audience, and the ever-growing reputation.

Finely cultivated greens are never far away for residents of Tres Santos.

Whales Love it Here, Too

Talk about a marathon: each winter, thousands of whales, mostly gray and humpback, make the 5,000 mile trip from their feeding grounds in Alaska to the shallow protected bays of Mexico’s Baja peninsula.

As the sun dips below the Baja horizon, odds are you are admiring your backyard view from Tres Santos with an ice-cold brew in hand.

The Fruits (and Veggies) of our Labor

The sun is shining and crops are well under way, digging their roots deep within the soil at Tres Santos’ acre-and-a-half organic community garden managed by Elizabeth Ibarra Vivanco.

I’ve overslept this morning and missed the chance to take my usual morning run, but that’s ok. 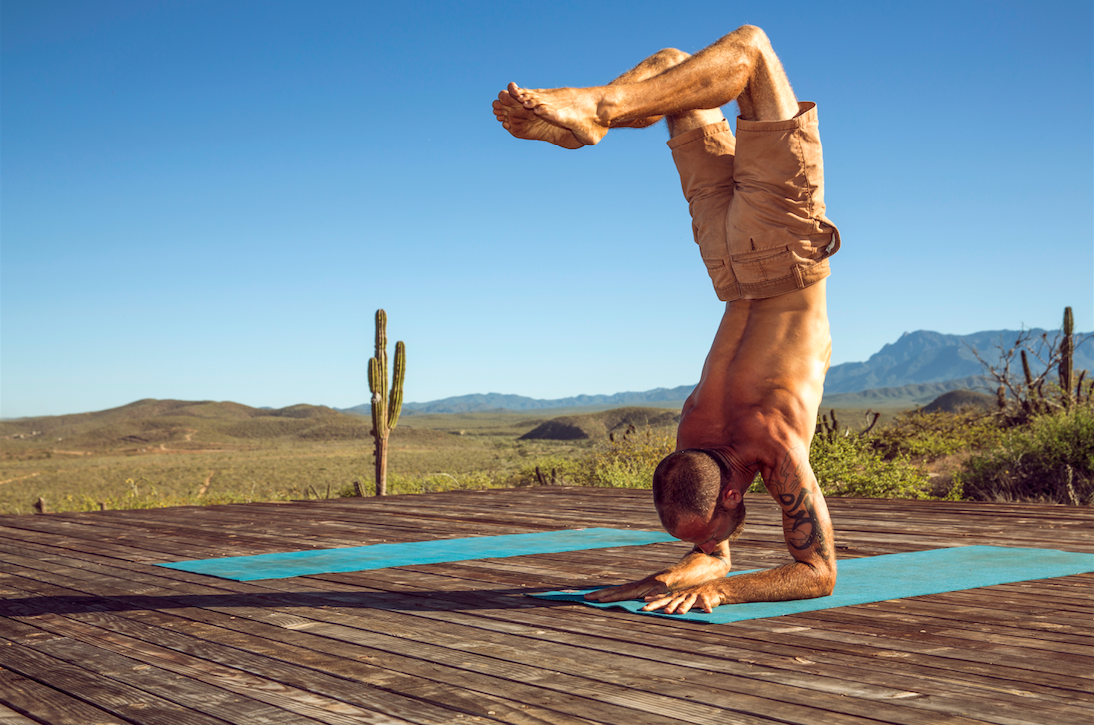 Not Your Average Bike Ride

Die-hard mountain bikers flock to the rocky, sunbaked trails of Moab and southern Arizona, and it’s easy to see why: the drama of the cinematic landscape is topped only by the exhilaration of riding through it. 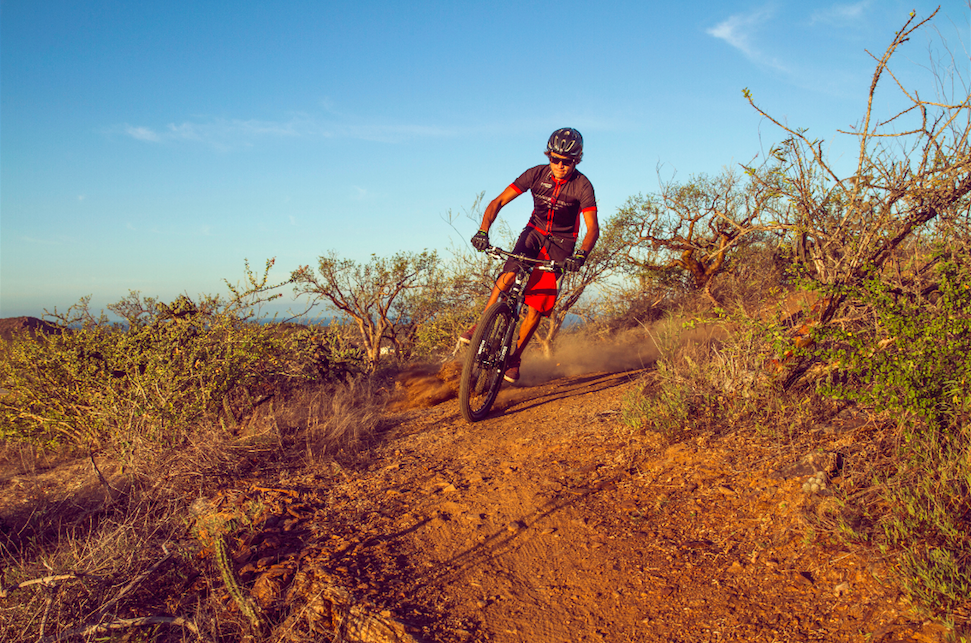 An Open Letter to the Residents of Todos Santos

Now that the first phase of Tres Santos is underway, we want to underscore the benefits that the development will… Read More

So Close to Cabo, Yet So Far Away

Cabo, as millions of visitors have witnessed over the years, is Baja Mexico’s go-to destination for all things party and tourism.

So You’re Saying There’s a Chance

As an avid fisherman for the better part of two decades, I like to think my standards are fairly high when it comes to “big” fish.

Flanked by the Pacific Ocean to the west and the Sierra Laguna mountains to the east, Tres Santos is surrounded… Read More

By providing inspiring spaces where members can focus on mindful living, stewardship, awareness and creative expression through yoga and other practices, Wanderlust’s core values echo those of Tres Santos.

Todos Santos Baseball: A Win-Win for the Community

Work hard, play hard—such was the motto for Tres Santos in October. While construction efforts continued on both beach and farm (link to update), we also found the time for plenty of fun—like the community-wide baseball game pitting the Todos Santos Cañeros against the Texas Playboys.

Construction efforts are hitting fifth gear as Tres Santos edges ever closer from dream to reality. We’ve been filming every… Read More

Take Me Out to the Ballgame

As Major League Baseball kicked off its postseason playoffs across the U.S., Todos Santos is geared up for its own… Read More

As we come to the middle of September, Hotel San Cristóbal at the Beach Village in Tres Santos is making great headway.

Tres Santos sponsors their own local mountain biking team, and we got some footage of them out testing the latest trails. It’s a small glimpse of the miles of trails, diverse terrain and stunning views you’ll find along the way.

Down and Dirty: Mountain Biking in Todos Santos

Tres Santos sponsors their own local mountain biking team, and we got some footage of them out testing the latest trails. It’s a small glimpse of the miles of trails, diverse terrain and stunning views you’ll find along the way.

Driving the road to Todos Santos has been an adventure for as long as it’s been a destination, but now, thanks to the completion of the new toll road bypass, it’s a leisurely drive from San Jose del Cabo.

If you’re looking for a last-minute Labor Day getaway, Huffington Post has the list for you. It’s not too late to book your trip to one of their 10 recommended destinations, including our very own Todos Santos.

Todos Santos Fishing – Where Pangas Are a Way of Life

The fishermen are a memorable part of the Todos Santos experience; for residents, they’re a symbol of what makes the town different from neighboring towns in Baja California Sur—an essential part of Todos Santos culture for 80 years and a big reason we fell in love with Todos Santos in the first place.

There’s plenty of great stuff to see, plenty of great places to stay, and getting here is a breeze. Here’s some information to help get you started on your Todos Santos travel getaway.

Todos Santos Travel: Before You Arrive

So you’ve finally decided to get down here to Todos Santos. It’s easier than ever to pop in for a weekend or a week and take in all the area has to offer.

Delta Sky’s Sarah Elbert and Airbnb’s Chip Conley talk about their discoveries in Todos Santos, including live music, galleries, fresh fish tacos, and more of themselves.

Something about Baja Sur just draws people here and we think it’s pretty cool that of all the places they could have shown in their latest commercial, Pacifico chose our own backyard to portray the easy, carefree, simple Baja lifestyle.

Our vision for Tres Santos is focused on health, serenity and a reconnection with nature. So to make that vision… Read More

Since before we broke ground on Tres Santos, we’ve heard from prospective residents, townspeople and others who are curious how… Read More

The community garden in Town Farm is well underway and, as you can see, so are the Garden Cottages which will have beautiful views of the seasonal blooms.

The making of true handmade silver jewelry is a lost art in many ways, but not in Todos Santos, and… Read More

The Battle at Cerritos Finds the Right Vibe

Under clear blue skies and featuring both locals and those from afar, surfers and bodyboarders competed for prizes for overall winners, best wave and best trick.

We’d like to congratulate the CSU Todos Santos Center on their ribbon cutting last weekend! What an exciting time for… Read More

Diffusing rumors and starting new ones with Liz Lambert

Today, the Austin Chronicle let the cat out of the bag  about Liz Lambert’s involvement with the future hotel at Tres Santos. We are beyond thrilled to have Liz and the Bunkhouse team involved. Sign up here to stay updated on future hotel news.

“…In other news, Bunkhouse continues to expand its reach. New projects in Travis Heights (the Terrace Hotel, adjacent to the Saint Cecilia) and Todos Santos, Mexico, on the beach in Baja California Sur (Tres Santos and the Todos Santos Music Festival) are moving forward and in the design phase with Lake|Flato, the original architectural team behind the San José.”

For the full article visit austinchronicle.com.

Back in Business After Hurricane Odile

This just in on Oceanhomemag.com:

“The human spirit, it seems, knows no bounds. Only 17 days after Hurricane Odile – a Category 4 storm packing torrential rain and winds of up to 125 mph – slammed into the popular beachfront resort town of Cabo San Lucas on Mexico’s Baja Peninsula last September, the unshakable community was back in business.”

Arizona Foothills Magazine featured the Todos Santos Music Festival in its latest issue, with a few shout outs to some of our favorite hotels in town.

15 Ideas for Your Next Weekend Getaway or Mini-Vacation

Guess who Men’s Health named #4? Our very own Todos Santos. Here’s what they had to say about our little town:

Pack your bags and grab the kids for a little Todos Santos vacay. The Todos Santos Inn made the Huffington Posts’s list of 5 family-friendly Mexico hotels.

“Big waves,
wild horses,
palm trees,
no one else in sight.”

As in, the Todos Santos Music Festival was in Sunset Magazine!

Another story about Tres Santos in Travel Pulse today.

We love this quote from Chip Conley, founder and former CEO of Joie de Vivre, who now serves as head of global hospitality & strategy for Airbnb, and is also overseeing the hotel planned at the Beach Village in Tres Santos, along with Bunkhouse Group. And for you “Here and Now” readers, here’s a sneak peak at the hotel concept:

We’re in the news!

Last week we announced Tres Santos to the world. You can read more about MIRA Companies presenting a wake-up call for mindful living with a new community in Todos Santos, Baja California, Mexico