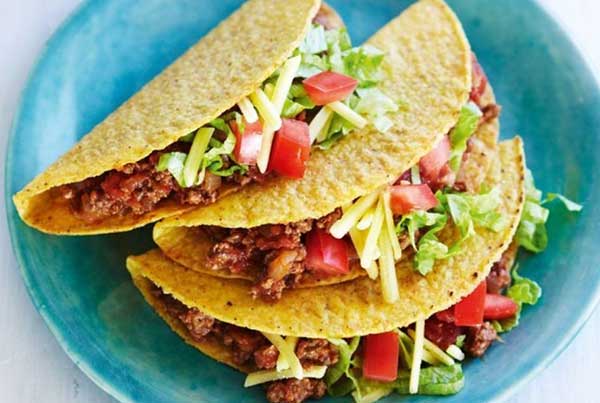 If Indonesia has rice with all kinds of preparations such as uduk rice, fried rice, grilled rice, and others. Likewise, Mexico has tortillas. This tortilla made from corn has many colors, there is a yellow color that comes from Mexico itself comes from yellow corn, white tortilla comes from white corn imported from America, blue tortilla comes from blue corn which according to various sources tastes stronger and tastier than other tortillas and also low in calories and rich in anti-oxidants, and finally there are red tortillas derived from red corn but this type of tortilla is less popular in Mexico because it is a little more expensive than others.
What are the processed tortillas in this sombrero country:

Since the entry of one tacos restaurant from America to other countries, tacos have become a current trend.
Tacos itself is a typical Mexican food that you can find in both roadside shops and expensive restaurants. Where the method of presentation is tortillas that are grilled briefly, then filled with various variants, such as beef, pork, chicken, nopal (cactus), seafood, grasshoppers then how to eat them by adding toppings such as onions, cilantro (cilantro), salsa de verde (green chili), or salsa de rojo (red chili), guacamole, pineapple (optional).

The most famous tacos are tacos al pastor. Al pastor is a method of grilling meat with a vertical iron, and is usually pre-seasoned. Maybe you are familiar if you have seen a kebab seller, the meat is exactly grilled like that. And it turns out that this method was adopted from a Lebanese immigrant who moved to Mexico around 1900, but then here the adaptation was replaced by using pork. The price can be priced from 17 Mexican pesos-55 Mexican pesos depending on the selected filling material.

While quesadillas and tacos may look the same, they are actually different. Although both use tortillas and also have filling ingredients, the filling ingredients are more diverse. It contains cheese, mashed meats, spices, epazote. Then bake until crispy and the cheese melts.
And one of the special menus for quesadillas is Quesadillas de Sesos, where beef brain is the stuffing ingredient. Maybe for people who don’t like cow brains, you guys will like this as much as I do. At first I didn’t know what sesos was, because it didn’t smell at all and it tasted delicious too.

For Mexican food, this one is one of the foods that are usually enjoyed in the morning as breakfast. Where the chilaquiles also use tortillas, but the tortillas here are cut into triangles and fried until dry. Then covered with salsa de verde (green chili) or salsa de rojo (red chili), then add onions, cheese, cream, avocado, then a choice of meat such as beef, chicken, or even eggs. There are also in some places that also add frijoles (mashed red beans)