Yes, You Can Surf

Stirred by strong currents, many of the wild and windswept beaches in Baja Mexico are better for strolling than swimming. Playa Los Cerritos, which is about a 10 minute drive from Tres Santos, is different. Hemmed by rocky promontories at either end, the sandy crescent forms a wide, protective cove that’s safe for swimming, but loaded with personality: waves, some massive, most manageable, roll into the gently sloping shore at regular intervals. It’s not just great for swimming, it’s fabulous for surfing. Which I was going to try.

I’ll admit I was nervous. My first surfing adventure had been several years ago on a particularly calm stretch of Waikiki Beach. Cerritos would be more of a challenge. But that was OK. Alive with waves and froth, the water was also filled with swimmers and surfers of all ages and levels. Seeing all those people gave me confidence.

Ask anyone in Todos Santos the name of the best surf instructor in the region and you’ll more than likely be directed to Mario Becerril, owner of Mario Surf School. Over the years, he’s perfected a technique that all but guarantees getting up and riding a wave. For newbies, the lesson starts rather awkwardly on a surfboard in the sand, where Mario can gauge strength and balance. Once I’d mastered going from prone to squatting to standing in a fluid, if graceless, motion, I was ready to hit the water. In addition to helping me manipulate the heavy board through the surf, Mario let me focus on getting up on the unstable board—harder than it sounds–by keeping an eagle eye out for rogue waves. Once in position, lying on my stomach, toes flat against the board, I waited for his signal, at which point I would begin paddling like mad toward shore.

“Go, go, go,” he suddenly shouted, and I did. A second or two later, as he told me to stand, I felt him lean on the back of the board, which allowed it to catch the edge of the wave as it curled toward home. And, suddenly, I was up, floating along the foam, feeling the water as it rushed under the board. As the wave lost power, my board slowed to where I could jump easily into the shallow water. I was exhilarated—and ready to try again.

It went on like this for an hour or two, until my arms felt like rubber bands. After dragging my board back to Mario’s tent, I collapsed on the beach, wishing I had another day to practice. Getting up, even with help, made me understand the draw of surfing. Practice equals skill which means even more fun. 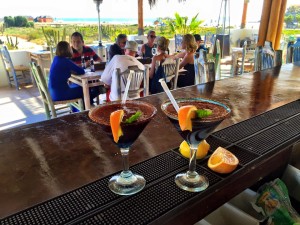 We celebrated standing on water at Free Souls, a two-story restaurant with a deck that overlooks the ocean on one side and the tawny mountains on the other. It would be easy to spend a day here: dishes like a layered stack of avocado, yellowfin tuna and goat cheese are fresh and delicious; craft cocktails flow freely and there’s even a pool and sun deck for lounging.

That night, a friend showed me a photo of me that she’d taken as I rode my board toward shore. I laughed when I saw my “wave”, which was so small that I was surprised it had the power to propel me at all. But it didn’t matter. I’d tried. I’d gotten up. I’d had a blast. And I couldn’t wait to do it again.